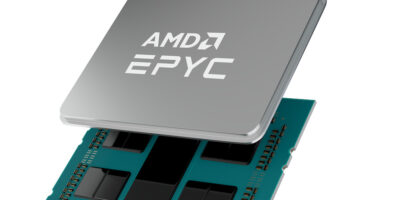 Delivering up to 19 per cent more instructions per clock, the EPYC 7003 series processors have been released by AMD. They are designed for high performance computing (HPC), cloud and enterprise customers and have Zen 3 cores and security features.

“With the launch of our 3rd Gen AMD EPYC processors, we are incredibly excited to deliver the fastest server CPU in the world,” says Forrest Norrod, senior vice president and general manager, Data Center and Embedded Solutions business group at AMD.

The EPYC 7003 series processors have up to 64 Zen 3 cores per processor and introduce new levels of per-core cache memory. They also continue to offer the PCIe 4 connectivity and memory bandwidth that defined the EPYC 7002 series CPUs.

For throughput computing capabilities to do more simulations in a given time period, or use bigger data sets or more complex models, AMD EPYC 7003 series processors enable faster time to discovery with more I/O and memory throughput, and powerful Zen 3 cores that deliver up to twice the performance for HPC workloads compared to any competing alternatives, says AMD.

The processors also increase transactional database processing by up to 19 per cent, improve Hadoop big data analytic sorts by up to 60 per cent and offer superior performance for a flexible Hyperconverged Infrastructure to help turn data into actionable insights faster, says AMD.

The AMD EPYC processor ecosystem is expected to grow significantly by the end of 2021 with more than 400 cloud instances using all generations of EPYC processors and 100 new server platforms using 3rd Gen EPYC processors. AMD EPYC 7003 Series processor-based solutions are available now through OEMs, ODMs, cloud providers and channel partners around the world.

Companies in the large AMD ecosystem have already responded and implemented the AMD EPYC 7003 series processors, including AWS, Google cloud and Microsoft Azure, Cisco, Dell Technologies, Lenovo and VMware are just some examples.