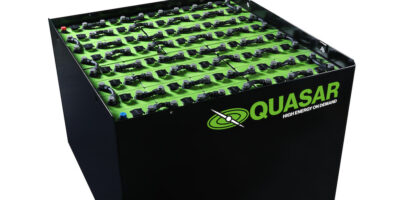 Longer running time, faster charging and improved performance are claimed to be the benefits delivered by Quasar batteries, based on carbon nanotube technology (CNT), released by Eternity Technologies.

The industrial batteries use CNT which enables the batteries to deliver up to 50 per cent higher performance at cold temperatures, with up to 25 per cent increased run time and two times faster recharge, said Eternity Technologies.

The Quasar batteries can be fully charged in just four hours and are suitable for materials handling equipment operating in multi-shift, outdoor and cold storage applications. Equally, said Eternity Technologies, the Quasar is suitable for extremely high temperatures indoors or outdoors.

Eternity Technologies derives its heritage from over 100 years of developments in lead acid battery technology. It operates from an industrial battery manufacturing facility, based in the United Arab Emirates, specialising in the manufacture and supply of industry leading, high performance industrial batteries. In addition to Eternity Technologies UAE, regional manufacturing facilities have been established in Germany, Spain, South America and USA, offering local cell assembly.

The company sells to over 100 countries worldwide and has established partner businesses to enable regional distributorship. The company offers a range of products, including cells, batteries, blocs, chargers and accessories for the motive power, standby power and renewable energy markets.