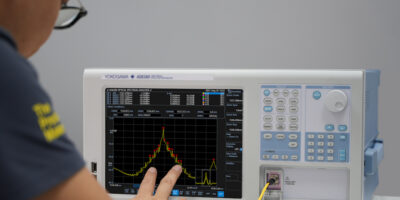 Exponential growth in the IoT, in cloud computing services, video broadcasting and conferencing, and the rise in access to mobile broadband, have all increased demand for data capacity. The levels expected over the next few years will mean that high capacity optical backhaul networks will be needed to serve the growing traffic density.  Dense wavelength division multiplexing (DWDM) is an optical multiplexing technology used to increase bandwidth over the existing fibre network but as data-hungry applications push DWDM systems’ performance, telecommunication channels become more closely spaced, making it more difficult to separate the individual channels in the wavelength division multiplexing (WDM) analysis on an optical spectrum analyser (OSA).

According to Yokogawa, the AQ6380 OSA offers unequalled optical performance to allow engineers and scientists to develop and improve the speed, bandwidth and quality of the next generation of communication networks. At the same time, it is easy to use so that it can be operated quickly and efficiently, says the company.

The AQ6380 has optical wavelength resolution down to five picometers (pm), allowing optical signals in close proximity to be clearly separated and accurately measured. Waveforms that were previously not even visible in a typical OSA, such as modulation side peaks in the laser spectrum, can now be accurately visualised, using the AQ6380, says Yokogawa.

Wavelength range is 1200 to 1650nm, allowing a single analyser to meet diverse wavelength measurement needs. The ability to alter the wavelength resolution from 5pm to 2nm allows a wide range of applications can be supported, from narrowband peak/notch measurements to wideband spectral measurements.

To maintain consistently high accuracy, the AQ6380 features on board calibration based on a built-in light source. Wavelength calibration is automatically performed at set intervals by switching the optical path with an internal optical switch.

A newly designed monochromator has sharper spectral characteristics than previously available, says Yokogawa, achieving a close-in dynamic range of up to 65dB. The result is that signals in close proximity can be clearly separated and accurately measured.

The analyser also has a fast measurement speed, capturing data points in only 0.23 seconds compared to 5.4 seconds for the existing model (AQ6370D) in certain conditions.

The high-resolution, responsive 10.4-inch touchscreen LCD makes the device as easy and intuitive to operate as a tablet, Yokogawa adds and results can be analysed using the integral functions to characterise optical spectrum from a variety of systems and devices, such as WDM system, DFB-LD, EDFA, and filters.

An App mode makes measurement set-up easier with an overview of the pre-installed testing apps and a guide to the set up process for specific measurements and analysis.