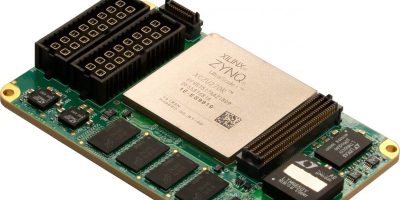 Claimed to be the only system-on-module (SoM) based on the Xilinx Zynq UltraScale+ RFSoC FPGA, the Model 6001 Quartz eXpress Module (QuartzXM) has eight integrated RF-class A/D and D/A converters.

Pentek’s Model 6001 Quartz XM measures only 2.5 by 4.0 inches (63.5 x 101mm) and includes all of the circuitry needed to maximise the performance of the RFSoC, says the company. The Model 6001 can be housed on the Pentek 3U VPX Model 5950 or it can be deployed on a custom carrier.

Pentek also offers a design kit which includes all of Pentek’s electrical and mechanical design knowledge to accelerate application-specific carrier design. The kit includes a review of the customer’s design with Pentek’s engineering staff; pin definitions and electrical specifications of all signals on the module; 3D models of the module; thermal profiles of the module and components; carrier reference design schematics; PCB stack-up recommendations; PCB design guidelines and routing rules; operating system and bootstrap guidelines.

Developers can use the module on a carrier in a standard form factor, for example, 3U VPX, and on custom carriers to match specific application requirements. Bob Sgandurra, Pentek’s director of product management points out: “Customers can develop their system software and IP on the 3U VPX product in the lab and then deploy the QuartzXM 6001 wherever it is needed by using custom carriers.”

The RFSoC module has a small footprint, critical for mil-aero applications. The Pentek Quartz architecture is designed so that all control and data paths are accessible by the RFSoC’s programmable logic and processing system. The Xilinx Zynq UltraScale+ RFSoC Processor integrates eight RF-class ADCs and DACs into the Zynq FPGA fabric, with quad ARM Cortex-A53 and dual ARM Cortex-R5 processors. This, says Pentek, creates a multi-channel data conversion and processing solution on a single chip. Complementing the RFSoC’s on-chip resources, the QuartzXM 6001 adds up to 18Gbytes of DDR4 SDRAM, LVDS connections to the Zynq UltraScale+ FPGA for custom I/O, connections for gigabit serial communication and all the power supplies and clocking management needed by the RFSoC.

Used with the Model 5950 3U VPX, the QuartzXM can be used immediately, without requiring FPGA development. When deployed on a custom carrier, the QuartzXM’s IP cores can be used as a foundation for building custom applications where size, weight and power (SWaP) are critical.

A separate high-speed connector to the carrier provides an interface to all of the digital signals supported by the RFSoC’s processing system and programmable logic sections.