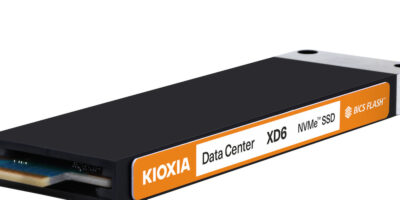 They are designed to optimise system density, efficiency and management. The E1.S small form factor replaces the M.2 form factor and leverages the OCP NVMe Cloud SSD specification for greater density, performance, reliability, and thermal management. E1.S is designed to be hot pluggable for increased serviceability.

The read-intensive XD6 series of SSDs use Kioxia’s BiCS FLASH 3D flash memory. They features 1 DWPD endurance, compliant to NVMe 1.3c and PCIe 4.0 specifications. The SSDs are available in capacities of 1.92 and 3.84Tbytes. There is also an option for TCG-Opal 2.0 encryption.

EDSFF E1.S is targeted at large-scale deployments in hyperscale data centres and has the ability to scale in terms of capacity, power, performance, and thermals. Drives designed to the OCP NVMe Cloud SSD specification can be used in the new OCP Yosemite V3 platform developed by Meta (formerly Facebook).

According to Jason Adrian, senior director of Azure Platform Architecture, Microsoft: “The EDSFF E1.S form factor is the future of flash storage in hyperscale data centres, including Azure platforms. Solid state disks designed to the OCP NVMe Cloud SSD specification, such as the Kioxia XD6 series, will power the next generation of EDSFF E1.S-based servers.”

Kioxia is an active and contributing member to the industry development of EDSFF E1 and E3 solutions work group and is collaborating with leading server and storage system developers to unlock the full power of flash memory, NVMe and PCIe technologies.