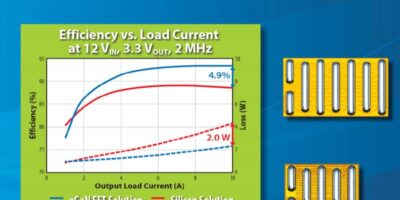 The 3.2 mOhm, 231A pulsed (EPC2218) and the 6 mOhm, 125A pulsed (EPC2204)  eGaN FETs have nearly 20 per cent lower RDS(on) and increased DC ratings compared with earlier generation eGaN FET products. According to EPC, the performance advantage over a benchmark silicon device is even higher than previous eGaN FETs.

The EPC2204 has 25 per cent lower on-resistance, yet is three times smaller in size than the benchmark silicon MOSFET, reports the company. Gate charge (QG) is less than half that of the silicon MOSFET benchmark, and like all eGaN FETs, there is no reverse recovery charge (QRR), enabling lower distortion class-D audio amplifiers, as well as more efficient synchronous rectifiers and motor drives, says EPC. The benchmark silicon MOSFET measures 3.3 x 3.3mm compared with 1.5 x 2.5mm for the EPC2204 for a device size of 3.75mm2 compared with 10.9mm2.

The 100V eGaN FETs are cost-competitive, at a price comparable with a silicon power MOSFET, says EPC. EPC CEO, Alex Lidow, says as a result of the eGaN FETs’ price and performance, designers can “take advantage of devices that are higher performance, smaller, more thermally efficient, and at a comparable cost”.