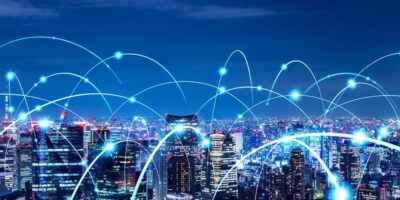 Base station receiver design can be a daunting task. Typical receiver components such as mixers, low noise amplifiers (LNAs), and analog-to-digital converters (ADCs) have progressively improved over time. However, architectures have only changed slightly. The limitation in architectural choices have held back base station designers from differentiating their products in the marketplace. Recent product developments, particularly integrated transceivers, have significantly relaxed some of the constraints of even the most challenging base station receiver designs. The new base station architecture offered by these transceivers allows base station designers more choices and ways to differentiate their product.

The family of integrated transceivers discussed in this article are the industry’s first to support all existing cellular standards, 2G to 5G, and cover the full sub-6 GHz tuning range. These transceivers allow base station designers to adopt a single, compact radio design across all band and power variants. 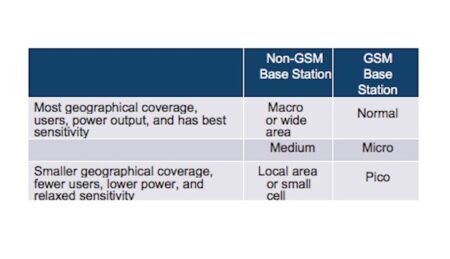 In addition, 3GPP also defines different modulation schemes. Broadly speaking, a practical breakdown of modulation schemes is into non-GSM (including LTE and CDMA types of modulation) and GSM-based modulation—particularly multicarrier GSM (MC-GSM). Of the two broad schemes, GSM is the most demanding in terms of RF and analog performance. Also, as higher throughput radios have become more common, MC-GSM has become the norm over the single carrier GSM case. Generally, a radio front end in a base station that can support MC-GSM performance can also handle non-GSM performance. Carriers that handle MC-GSM will have more flexibility in market opportunities.

The wide area or macrobase station has traditionally been the most challenging and expensive receiver design, and historically has been the workhorse of our wireless communications networks. What makes it so challenging? In a word, sensitivity.

Let’s focus on static sensitivity, first. In engineering parlance, sensitivity is determined by the system noise figure (NF). A lower noise figure means better sensitivity. The desired sensitivity is achieved by increasing gain to achieve the desired system NF, and gain is generated by an expensive component called a low noise amplifier (LNA). The higher the gain, the more an LNA costs in dollars and power.

In the presence of interference, our system loses the sensitivity we worked so hard to achieve. This trade-off gets worse with higher gain, because gain typically comes with lower linearity. In other words, too much gain degrades linearity performance, which leads to sensitivity degradation under strong interference.

Wireless communication networks are designed such that the burden of network performance is on the base station side as opposed to the handset side. WA-BSs are designed to cover a large area and achieve excellent sensitivity performance. A WA-BS must have the best static sensitivity to support handsets at the cell edge where the signal from handset is very weak. On the other hand, under interference or blocking conditions a WA-BS receiver’s dynamic sensitivity still needs to be good. The receiver still must exhibit good performance on a weak signal from a handset, even while a strong signal from a handset near the base station generates interference.

The following signal chain is a simplified typical discrete component-based system receiver. The LNA, mixer, and variable gain amplifier (VGA) are referred to as the RF front end. The RF front end is designed with a noise figure of 1.8 dB, while the ADC has a noise figure of 29 dB, and in the analysis in Figure 1, the RF front-end gain is swept on the x-axis to show the system sensitivity.

Now let’s compare a simplified transceiver receive signal chain. One can see the transceiver receive signal chain bill of materials is smaller than the comparable discrete component signal chain. Additionally, the transceivers are designed with two transmitters and two receivers on chip. The apparently simple integration hides the elegance of the receiver design, which typically achieves a 12 dB noise figure. The following analysis shown in Figure 2 will show how the sensitivity pays off in a system. 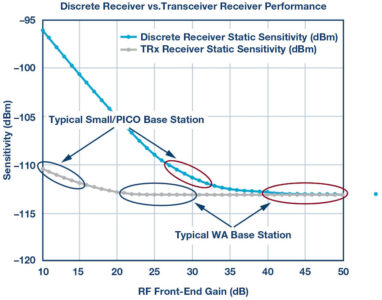 It’s worth mentioning that in the presence of too much interference, systems are designed to reduce gain to a point where the interference can be tolerated and increase the gain when the interference is reduced. This is referred to as automatic gain control (AGC). Any reduction in gain is also going to reduce the sensitivity. If a system can tolerate the interferers, it is often best to keep the gain as high as possible to maximize sensitivity. AGC is a topic for a future discussion.

In summary, two outstanding features of this class of transceivers are excellent noise figure and higher immunity to interference. Using a transceiver in your signal chain means you can achieve a desired static sensitivity with much less front-end gain. In addition, the lower level of interference means you can achieve better dynamic sensitivity. If you need a LNA at all, it will be a less costly LNA and consume less power. You can also make different design trade-offs elsewhere in the system to take advantage of these features.

Today, there are configurable transceiver products in the market that fill a role in both wide area and small cell base station designs. Analog Devices is taking a leadership role in this new approach, with ADRV9009 and ADRV9008 products are
well-suited for wide area base stations and MC-GSM levels of performance. Additionally, the AD9371 family offers options with non-GSM (CDMA, LTE)  performance and bandwidth, but more power optimization.

This article is far from a thorough overview. The topic of sensitivity will receive a deeper treatment in our follow-up articles. Additionally, other challenges in base station receiver design include automatic gain control (AGC) algorithms, channel estimation, and equalization algorithms, etc. We plan to follow this article with a series of technical articles with the aim of simplifying your design process and improving your receiver system understanding.

Jon Lanford works as a system and firmware verification manager in the Transceiver Product Group at Analog Devices Greensboro. He has worked at ADI since completing his master’s degree in electrical engineering from North Carolina State University in 2003. His previous engineering roles include gigasample pipeline ADC design and calibration algorithm design, as well as test development for transceivers. He can be reached at jonathan.lanford@analog.com.

Kenny Man’s 25 year career has spanned across system design on high speed instrumentation and wireless base stations, system applications, and system architecture for wireless infrastructure in telecom equipment companies and semiconductor companies. His present role is in product engineering where he wants to better contribute to the building blocks of communication infrastructure. His hobbies include hiking, snow skiing, and reading history. He can be reached at kenny.man@analog.com.