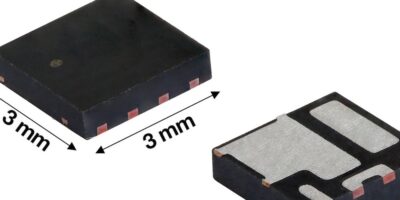 Combining a high side TrenchFET MOSFET and a low side SkyFET MOSFET and integrating a Schottky diode, the SiZ300DT is a 30V n-channel MOSFET half bridge power stage by Vishay Siliconix. The SiZ300DT is supplied in a compact PowerPAIR 3.3 x 3.3mm package.

It can reduce component count and simplifies design in power conversion for computing and telecomms applications to increase power density and efficiency, says Vishay.

The SiZF300DT is 65 per cent smaller than dual devices in 6.0 x 5.0mm packages with similar on resistance, says Vishay. It saves space for point of load (PoL) conversion, power supplies and synchronous buck and DC/DC converters in graphic and accelerator cards, computers, servers and telecomms and RF networking equipment.

The dual MOSFET features a pin configuration and construction delivers up to 11 per cent higher output current per current phase than competing products in the same footprint area, according to Vishay. It also delivers higher efficiency for output current above 20A, says the company. The pin configuration and large PGND pad are claimed to enhance thermal transfer, optimise the electrical path and enables a simplified PCB layout.

The SiZF300DT is 100 per cent Rg- and UIS-tested, RoHS-compliant, and halogen-free.

Samples and production quantities of the dual MOSFET are available now, with lead times of 12 weeks for large orders.