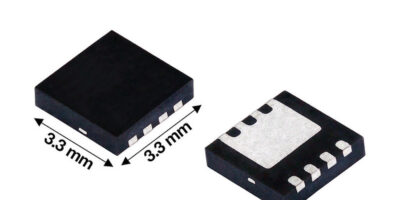 The Vishay Siliconix MOSFET is offered in the 3.3 x 3.3mm thermally enhanced PowerPAK 1212-8S package. It is claimed to have best in class on-resistance of 0.95mOhm at 10V, a five per cent improvement over the previous generation. It also has on-resistance of 1.5mOhm at 4.5V, and 29.8mΩ*nC on-resistance times gate charge at 4.5V. This is one of the lowest FOM for MOSFETs used in switching applications, says Vishay.

The SiSS52DN’s FOM represents a 29 per cent improvement over earlier devices, resulting in reduced conduction and switching losses to save energy in power conversion applications.

The SiSS52DN is suitable for low side switching for synchronous rectification, synchronous buck converters, DC/DC converters, switch tank topologies, OR-ring FETs, and load switches for power supplies in servers and telecomms and RF equipment. High performance in isolated and non-isolated topologies means the MOSFET simplifies part selection for designers working with both topologies.

The device is 100 per cent RG- and UIS-tested, RoHS-compliant, and halogen-free.

Samples and production quantities of the SiSS52DN are available now, with lead times of 12 weeks.