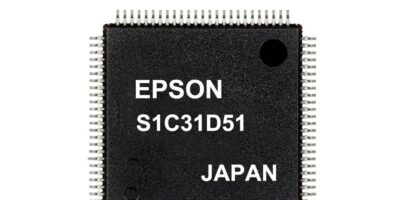 Microcontrollers from Epson can bring sounds to home appliances and other equipment in a variety of settings. The Arm Cortex-M0+ based S1C31D51 microcontroller has dedicated hardware which can play sound on either a speaker or buzzer.

The S1C31D51 is suitable for a variety of applications and environments. Epson says it can be used to integrate sound into home electronics, remote controllers for home appliances, industrial devices, health and fitness equipment with guidance systems, or alarms in office buildings, shopping complexes, and factories.

An Arm Cortex-M0+ processor integrated with a dedicated hardware processor provides two-channel sound on a single microcontroller chip. There is a variety of speech and audio playback functions, two-channel mixing sound (for playing background music and voice) and voice speed conversion, with a playback speed that is adjustable in five per cent increments between 75 and 125 per cent.

It is possible to output voice guidance sound like error and warning messages on a buzzer instead of a speaker. Epson says it has improved buzzer sound output performance, which can often be poor because of low volume and limited bandwidth, by using a combination of software and hardware support.

The hardware processor plays sound without requiring CPU resources, so these can be allocated to other processes even during sound playback. The use of a high data compression algorithm (16kbits per second at 15.625kHz) reduces the size of sound data memory, making it possible to provide a large amount of sound data and sound data in multiple languages.

Epson`s Voice Creation PC software tool will be provided free of charge to customers. It is a simple development environment for creating sound data for 12 languages without studio recording. Existing WAV data can also be used.

The S1C31D51 has a self- memory check function that can detect failures in built-in RAM, built-in flash, and external QSPI-flash memories without using CPU resources.

There is a variety of ways to play back sound: electromagnetic buzzer, piezoelectric buzzer and a speaker.

The S1C31D51 evaluation board includes the electromagnetic and piezoelectric buzzer by TDK that allows quick audio testing along with the pre-set demonstration.