3U OpenVPX SBC is rugged with advanced security 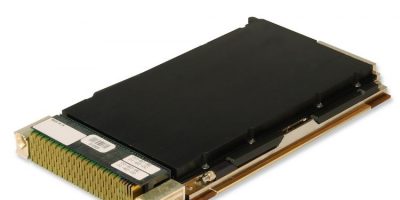 Anti-Tamper and Information Assurance functionality is integrated in the SBC3511 3U OpenVPX single board computer (SBC), introduced by Abaco Systems.

The SBC3511’s is based on the Intel Xeon E-2176M six-core/12-thread processor (formerly known as Coffee Lake) operating at 2.7GHz with TurboBoost up to 4.4GHz. It also has 32 Gbytes of DDR4 RAM and up to 256Gbytes of nVME SSD. There is also a 40GbE data plane, delivering a high speed interconnect but also alignment with the Sensor Open Systems Architecture (SOSA) technical standard.

SOSA creates a common framework for transitioning sensor systems to an open systems architecture. It is based on key interfaces and open standards established by industry-government consensus, explains Abaco.

The SBC3511 SBC has a range of security features designed to assist with user-defined Anti-Tamper and Information Assurance strategies. The onboard Xilinx Zynq UltraScale+ MPSoC’s built-in security capabilities include a physical unclonable function (PUF), user-accessible hardened cryptographic blocks, asymmetric authentication, side channel attack protection, and other silicon-based AT features. It can be used to instantiate a range of Abaco-defined security features, or by customers to embed application-specific features. Support is also provided for Intel’s Trusted Execution Technology.

The SBC3511 is supported by Abaco’s ecosystem that includes graphics processors, FPGA and DSP boards, switches and carrier cards.

Development kits, including starter cages and accessories, are also available.

The SBC3511 also includes a x8 PCIe Gen 3 XMC site, one USB 2.0 port and one USB 3.1 port, a DisplayPort interface, two serial ports, a SATA port and up to eight GPIO pins.