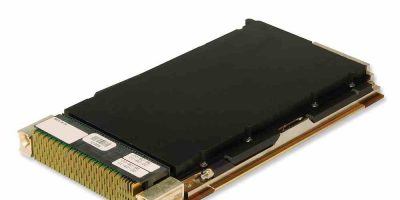 Abaco Systems has announced an upgrade to the SBC3511 3U VPX single board computer (SBC), which now features the 9th generation i7 6-core Intel Xeon E-2276ME processor (‘Coffee Lake Refresh’) operating at 2.8GHz (with turbo mode up to 4.4GHz). The processor is specifically designed for the specific demands of embedded applications.

For secure computing it has a security hub based on the Xilinx Ultrascale+ FPGA. This has built-in security capabilities including a physical unclonable function (PUF), user-accessible hardened cryptographic blocks, asymmetric authentication, side channel attack protection and other silicon-based AT features. It can be used to harden the Chain of Trust, which includes Intel Trusted Execution technology.

Abaco has also confirmed it is developing a security toolkit which will provide users with optional security features.

The SBC3511 supports up to 32Gbytes of DDR4 memory, and is equipped with a 64Gbyte NVMe SSD. Connectivity includes USB 3.1/2.0, DisplayPort, SATA, GPIO and COM. An XMC site allows for further functional expansion. The SBC3511 is available in a range of air- and conduction cooled build levels with extended temperature capability up to 85 degrees C. Support for Windows, Linux and VxWorks is provided.

The company has also announced that the SBC3511 will be followed by further 3U and 6U VPX boards, based on Intel’s latest processor.

Among them will be the SBC3211, also based on the Coffee Lake Refresh processor, which will feature a x4 PCI Express (Gen 3) data plane for compatibility with earlier Abaco 3U VPX SBCs. This will be a cost-effective form-, fit- and function compatible upgrade for Abaco 3U VPX SBCs including the SBC326, SBC328 and SBC329. It is expected that the new processor will offer 50 per cent greater throughput than the 7th generation ‘Kaby Lake’ processor used in the SBC329.