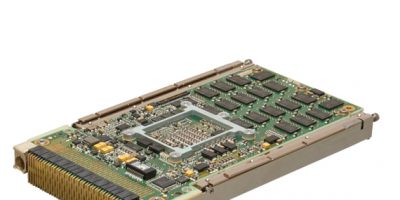 Described as a significant breakthrough for performance from a 3U VPX single board computer (SBC), Abaco Systems has implemented a cooling strategy, using the 12-core Intel Xeon D-1500 processor. The SBC347D can now operate at 100 per cent of its capability at temperatures up to 75 degree C in a cold wall (conduction cooled) environment, says Abaco Systems.

Traditional solutions implemented on other SBCs result in the CPU being throttled by up to 50 per cent of its core frequency, causing a substantial deterioration in performance, explains Abaco Systems. This throttling is in order to maintain the processor within its rated temperature range to avoid failure.

Richard Kirk, product manager, Abaco Systems says that the advantage of this cooling architecture gives the SBC347D higher performance, repeatability and consistency of that performance “almost regardless of operating temperature”.

“The SBC347D will operate at its maximum frequency at all times – not just when it’s cool enough to do so. That can be highly advantageous in, for example, applications that require real time determinism,” he adds.

The SBC347D with enhanced cooling is available immediately. Abaco expects that the new cooling architecture will be progressively implemented across its SBC product lines.

The Intel Xeon processor has a maximum power of 45W and is a lidded component, which adds additional thermal resistance.  In Abaco’s SBC heat frame designs, removing this heat from the high performance processor is a challenge to achieve good thermal margin and full processor performance at high card edge temperatures.  Abaco has combined its traditional solution for removing/spreading heat with a reliable space grade technology to move heat through the heat frame with a low temperature drop while maintaining 500V electrical isolation. This means that the SBC347D is able to perform at higher temperatures, but is also light in weight compared to traditional solid metal heat sinks.

The SBC347D features versions of the Xeon D-1500 processor that offer support for up to 16 cores. It is designed for demanding high performance embedded computing (HPEC) military/aerospace applications such as command and control, ISR, signal processing, radar/sonar and electronic warfare.

The higher level of integration of the Xeon processor provides additional board real estate, enabling the SBC347D to support twice as much memory as its predecessor. The SBC347D features up to 32Gbytes of DDR4 ECC memory, operating at up to 2.0MHZ, enabling superior memory performance. There is also 32Gbytes NAND Flash (SSD), 32Mbytes BIOS flash and 16Mbytes BIOS back-up flash memory.

The SBC347D enables customers to implement their security and information assurance strategies, via a secure FPGA that offers protection against differential power analysis (DPA) attacks and against single event upsets (SEU) as well as a range of tamper detect, encryption and zeroisation features which can be implemented by the user, says Abaco.