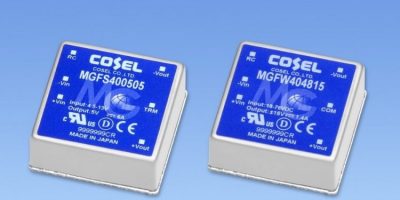 Packaged in an industry standard 1.0 x 1.0-inch (25.4 x 25.4mm), six sided, shielded metallic case, the MGF40 40W DC/DC converter has been designed by Cosel to provide a failure rate of below 30 ppm. To guarantee lifetime quality, the MGF40 does not include aluminum or tantalum capacitors, says Cosel and is covered by a warranty period of 10 years.

The MGF40 includes over-current and over-voltage protection. To protect against over-heating, thermal protection switches the unit off when the maximum allowable safe temperature is reached.

Negative logic is provided as standard, the unit is on when the RC pin is at a low level and off when it is at a high. The MGF40 can be ordered with positive logic, option-R. A control pin allows the user to turn the unit on/off remotely. For applications requiring lower leakage current or no Y-capacitor connected between the input and the output, an option-G is available.

Calculated in accordance with the Telcordia reliability prediction procedure Issue 4 of SR-332, at 100 per cent load and at +25 degrees C ambient temperature, the MGF40 series has a mean time between failure of 3,153,843 hours, and 675,688 hours at +60 degrees C ambient. Calculations are at ground fixed, controlled (GB).

The MGF40 series has been tested to sustain rough conditions and has passed three-axis vibration testing equivalent to 10G and shock testing of 50G.

It is housed in a metallic, six-sided, shielded case with high attenuation input filter, and is claimed to offer EMI performance with figures being far below the EN55032:2012 Class A in conduction and radiated emission at three metres.