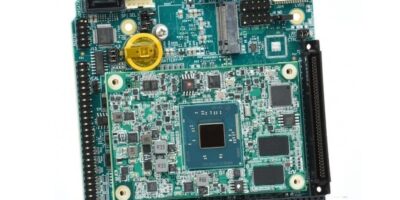 Diamond Systems has introduced Athena IV, a wide‐temperature, computer-on-module based single board computer (SBC) with integrated data acquisition and PC/104 input/output expansion. This combination of features suits the compact 4.2in x 4.5in board to a range of embedded computing applications.

Customers using previous generations of Athena can upgrade to Athena IV with the minimal amount of re‐engineering compared with that needed to migrate to an entirely different SBC, says Diamond. In addition, embedded systems using competitor PC/104 SBCs approaching end of life can migrate to the Athena platform to extend their product lifetimes “practically indefinitely”, owing to its use of COM architecture.

The analogue circuitry features programmable input ranges, 150KHz sampling rate, and Diamond’s signature autocalibration, which enables the circuit to be calibrated under software control at any time to maintain accuracy over the life of the system.

All I/O features are supported by Diamond’s universal driver programming library, which includes sample code, executables, and a novel graphical user interface control panel that can be used for quick bring‐up, application modelling, as well as system debugging. For applications requiring additional I/O, Athena IV offers the PC/104 expansion socket, enabling it to be used with hundreds of I/O boards from companies worldwide.

The ‐40/+85 degrees C operating temperature range, as well as the 50 per cent thicker PCB suits the package to rugged environments involving temperature and shock / vibration extremes.