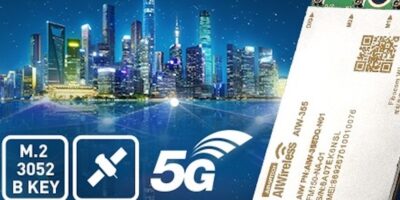 Extending the AIW-300 series, the AIW-355 is a 5G module for Advantech Industrial Wireless (AIW) designed for artificial intelligence on the net (AIoT) which requires ubiquitous connectivity, dynamic mobility and security. The AIW-355 is intended for use in edge computing devices, mobile gateways and mobile devices around the world, said Advantech.

The wireless module also features a M.2 3052 form-factor M.2 Key B USB interface to accommodate most mainstream carriers and to also ease 5G integration. There are also a multi-constellation GNSS receiver and USB 3.1 high-speed interfaces integrated into the module.

There are three versions of AIW-355 available for applications in North America, Europe and China. Every version supports both 5G SA and NSA network architectures and delivers faster transmission speeds, better carrying capacities, and lower network latency. Each model can operate in temperature ranges of -30 to +75 degrees C and is compatible with Windows and Linux.