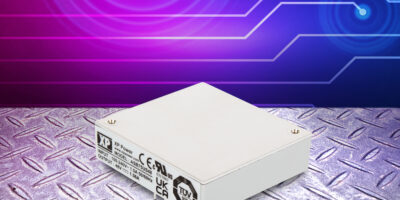 XP Power has a new range of low profile, half brick, baseplate cooled AC-DC power supplies which require no external circuitry for operation or EMC compliance. Models in the ASB75 series offer compact, fanless power with baseplate cooling for applications such as information technology equipment, Internet of things, general industrial and harsh or rugged applications.

The complete AC-DC power supplies deliver up to 75W of power from a universal (90-264VAC) input and feature an integral AC fuse, EMC filter and hold-up capacitor which helps simplify integration and which targets space-critical applications.

ASB75 devices feature baseplate cooling, enabling operation in sealed metal enclosures using passive cold wall cooling to transfer any heat to the outside of the equipment. An optional heatsink is also available pre-mounted or separately allowing designers to use conventional convection or forced air cooling where preferred.

With a no load current draw of less than 150mW of power, the ASB75 models reduce standby power needs of end equipment, allowing them to meet challenging modern efficiency standards.

The units offer EMC compliance as standard with no external components required to meet EN55032 Level B for conducted and radiated emissions, as well as offering immunity to meet EN61000-4. Safety compliance to UL/EN/IEC62368-1 also comes as standard.

The rugged, encapsulated devices have in-built protection for over temperature, overcurrent, overvoltage and output short-circuit built in, thereby protecting the device as well as any load that it is powering.

A baseplate operating temperature of -40 degrees C to +8 degrees C suit ASB75 devices to a range of application environments while full encapsulation increases reliability in harsh environments and applications that require rugged devices.