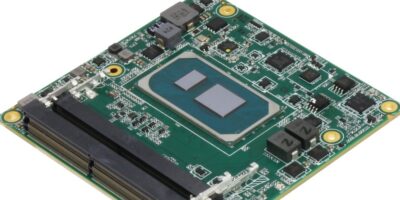 Based on the 11th Generation Intel Core processor, the COM-TGUC6 has been released by Aaeon. It offers developers and users a significant increase in performance over previous generations of COM boards, says Aaeon, with faster memory speeds, greater display support and higher bandwidth connections.

The rugged design increases processing performance with the 11th Generation Intel Core U processors (formerly Tiger Lake). For memory operations it supports dual DDR4 modules up to 3200MHz. The board supports in-band ECC, providing memory error detection even with non-ECC memory modules. Together this offers faster, more accurate data processing, vital for increasingly complex applications in robotics and AI computing, says Aaeon. The COM-TGUC6 can be configured with the industrial grade Intel Core U processor, enabling the board to meet WiTAS II wide temperature specifications, operating in temperatures from -40 to +85 degrees C.

The COM-TGUC6 also provides flexible display support, with connections for VGA, up to three DDI ports and LVDS / eDP support. The board is capable of powering up to four independent displays, for digital signage, medical equipment and gaming. The COM-TGUC6 also supports a range of expansion options including five PCIe Gen 3 lanes, as well as PCI Express Graphics (PEG) Gen 4.

Aaeon provides customers and clients with a range of services to help ensure the right product for the job. From carrier boards and enclosures to OEM / ODM services, the company’s service and support helps accelerate development and reduce time to market.