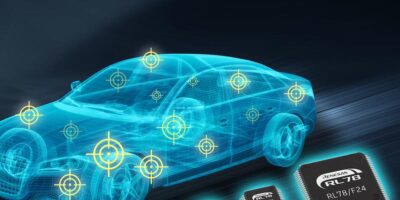 Two microcontrollers (MCUs) released by Renesas Electronics are designed for automotive actuator and sensor control applications. The RL78/F24 and RL78/F23 have been added to the RL78 family of low power, 16-bit MCUs. The company says that, with these additions, the automotive portfolio offers customers reliable, high-performance devices for systems ranging from actuators to zone control.

Electrical and electronic (E/E) architecture is extending to include zone and domain control applications. This means control mechanisms have to evolve to accommodate body control for automotive systems such as lights, windows, and mirrors, motor control for engine pumps and fans and multiple sensor control. In future, high-speed and secure connectivity with zone and domain controllers will be mission critical for edge electronic control units (ECUs), advises Renesas. The RL78/F24 and RL78/F23 MCUs support the CAN FD high speed communication protocol (RL78/F24) and EVITA-Light security. They are also optimised for systems targeting ASIL-B levels under the ISO 26262 functional safety standard.

The future of automotive systems design lies in a vehicle-centralised, zone-oriented E/E architecture, the company maintains. This trend is creating higher demand for more advanced functionality and better performance in actuator controller applications. The RL78/F24 and RL78/F23 MCUs deliver up to approximately 70 per cent faster operating frequencies than the previous generation, which can more than double the performance in brushless DC (DLDC) motor control applications.

The hardware accelerator and timer functions for motor control have also been enhanced and a 12-bit ADC has been added.

The MCUs support a selection of connectivity interfaces, including CAN FD (RL78/F24), LIN, SPI, and I2C. For security, there is support for EVITA-Light and for AES-128/192/256 encryption algorithms.

The additions to the RL78 family are pin-compatible and have the same energy efficiency.

Sampling of the RL78/F24 and RL78/F23 MCUs will be available starting April 2022, with mass production scheduled to begin in the second half of 2023.