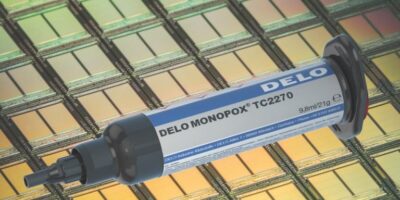 Distributor, Inseto, has announced that it now offers Delo’s Monopox TC2270 adhesive for chip bonding and other applications where electrically insulated heat transfer is required.

For example, heat build-up is a common reason for IC failure and the efficient dissipation of heat in power semiconductors, increasingly used in automotive applications, is a considerable challenge, confirms Inseto. With a specific thermal conductivity of 1.7W/mK, Monopox TC2270 ensures efficient heat transfer between die and packaging. It is also cheaper than silver epoxy, which has the often-unwanted property of being electrically, as well as thermally, conductive.

The Monopox TC2270 is supplied in 10ml syringes. Minimum curing temperature is 60 degrees C in about 90 minutes, which means it can be used with temperature- sensitive materials with little risk of introducing stress or causing warpage. In addition, it is a one-part adhesive, so no mixing is required and storage is at -18 degrees C, a temperature accommodated by standard commercially available

Freezers. Inseto points out that most die-attach adhesives need to be stored in industrial freezers at much lower temperatures, such as -40 degrees C.

Once cured, Monopox TC2270 delivers a die shear strength of 60N/mm2 and has an end-application use range of -40 to +150 degrees C, which is more than adequate for most silicon-based semiconductors.

In addition to its shear strength, Monopox TC2270 boasts a relatively high flexibility (11 per cent compared to the less than two per cent exhibited by most epoxies), making it ideal for bonding larger die. It also has a very low water absorption figure of just 0.1 per cent and, once cured, volume resistivity is greater than 1xE14 Ohm cm and its surface resistance is greater than 1xE13 Ohms.

The adhesive has an anticipated shelf life of six months.