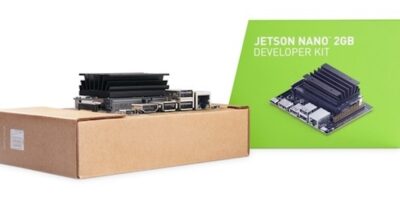 A developer kit to teach AI has been created by Nvidia. The Nvidia Jetson Nano 2Gbyte developer kit is aimed at a new generation of students, educators and hobbyists, Nvidia said at last week’s GTC.

The Jetson Nano 2Gbyte developer kit is supported by Nvidia’s free online training and AI-certification programs, to supplement the many open-source projects, how-tos and videos contributed by thousands of developers in the Jetson community.

The kit is the latest offering in Nvidia’s Jetson AI at the Edge platform, which ranges from entry-level AI devices to advanced platforms for fully autonomous machines.

It is supported by the company’s JetPack software development kit (SDK), which comes with Nvidia container runtime and a full Linux software development environment. This allows developers to package their applications for Jetson with all its dependencies into a single container that is designed to work in any deployment. And it is powered by the same CUDA-X accelerated computing stack used to create breakthrough AI products in such fields as self-driving cars, industrial IoT, healthcare and smart cities.

The Jetson Nano 2Gbyte developer kit can run a diverse set of AI models and frameworks and provides a scalable platform for learning and creating AI applications as they evolve.

It has been endorsed by organisations, enterprises, educators and partners in the embedded computing ecosystem. For example, Jim McGregor, principal analyst at Tarias Research, said: “Nvidia’s Jetson is driving the biggest revolution in industrial AIoT. With the new Jetson Nano 2GB, NVIDIA opens up AI learning and development to a broader audience, using the same software stack as its data center AI computing platform.”

Matthew Tarascio, vice president of Artificial Intelligence at Lockheed Martin, said: “Acquiring new technical skills with a hands-on approach to AI learning becomes critical as AIoT drives the demand for interconnected devices and increasingly complex industrial applications. We’ve used the Nvidia Jetson platform as part of our ongoing efforts to train and prepare our global workforce for the AI revolution.”

It has also been used as part of the STEM curriculum at Boys & Girls Club of Western Pennsylvania, USA.

The Jetson Nano 2GB Developer Kit will be available at the end of the month for $59 through NVIDIA’s distribution channels.