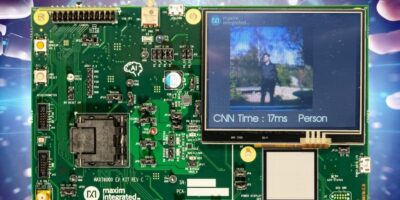 Claimed to be the lowest power person detection system, the combination of Maxim Integrated’s MAX78000 artificial intelligence (AI) microcontroller and Aizip’s Visual Wake Words model bring human-figure detection to IoT imaging and video with a power budget of just 0.7 mJ per inference. This, says Maxim, is a 100 fold improvement on the performance of conventional software, making it “the most economical and efficient IoT person-detection solution available”.

The MAX78000 microcontroller and MAX78000EVKIT# evaluation kit are available now directly from Maxim Integrated’s website and through authorised distributors.