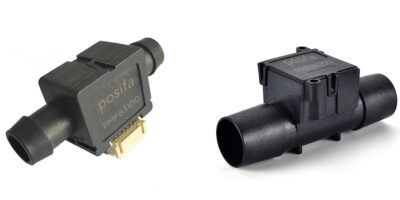 Air flow sensors with enhanced protection, with parylene coating can be used in harsh environments. The PMF83000 and PMF86000 series sensors have the coating over the entire PCB assembly, including the sensor die, making them suitable for respiratory care and other medical applications, says Posifa Technologies.

The mass air flow sensors provide an extra level of protection for reliable performance in harsh environments with high humidity and trace amounts of corrosive gases, says the company. The sensors, in robust packages are for use in ventilators, respirators, oxygen concentrators, nebulisers, and continuous positive airway pressure (CPAP) equipment, where they control the volume of air flow to patients. They also provide mass flow measurement in anesthesia delivery, fuel cell control, and environmental monitoring equipment.

The PMF83000 and PMF86000 series feature Posifa’s third-generation thermal flow die. The sensor die uses a pair of thermopiles to detect changes in temperature gradient caused by mass flow, for what is described as “excellent” signal to noise (SNR) performance and repeatability of 0.5 per cent full scale (FS). Both the PMF83000 and PMF86000 series feature a single main flow path design, eliminating the risk of the bypass being clogged by water condensation and dust particles, says the company.

The PMF83000 measures flow rates from 15 to 100 standard litres per minute (SLM) and the PMF86000 series measures from 50 to 300 SLM. Both offer fast response times of five milliseconds typical and operate over temperature ranges of -25 to +65 degrees C. The devices provide both analogue (voltage) and digital I²C outputs in the same package and support bidirectional flow measurement.

The sensors’ features and specificiations can be customised on request. Samples and production quantities of the PMF83000 and PMF86000 mass air flow sensors are available now.

Posifa has direct sales and a network of distributors in the United States, Europe, Korea, and Taiwan. The company is headquartered in San Jose, California, with an office in Shenzhen, China.