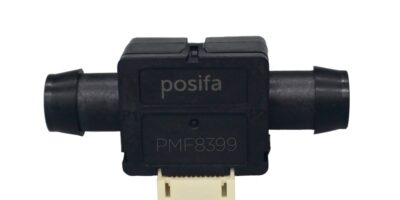 Posifa Technologies has announced its PMF8300 series of mass air flow sensors for use in respiratory care and other medical and instrumentation applications. Compared to the company’s earlier PMF8300 series, they offer improved accuracy, repeatability, and signal-to-noise performance, all at a lower cost.

The compact, robust sensors can be used in ventilators, respirators, oxygen concentrators, nebulisers, and continuous positive airway pressure (CPAP) equipment, where they control the volume of air flow to patients. They can also be used to provide mass flow measurement in spectroscopy and environmental monitoring equipment.

The PMF8300 air flow sensors are a cost-effective upgrade for new equipment designs. The simplified design allows Posifa to scale up production rapidly in response to sudden surges in demand.

The solid state thermal isolation structure eliminates the need for the surface cavity or fragile membrane typically used. According to Posifa, the sensor die, with its silicon carbide protective film, is robust against water condensation while allowing the highest level of sensitivity and minimising the cost of packaging.

The sensors provide both analogue (voltage) and digital I²C outputs in the same package and can be customised with bi-directional flow sensing.

Posifa serves its global customer base through direct sales and a network of distributors in the United States, Europe, Korea, and Taiwan. The company is headquartered in San Jose, California, with an office in Shenzhen, China.