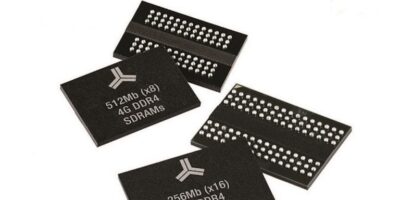 The AS4C256M16D4 and AS4C512M8D4 offer improved performance over previous-generation DDR3 devices, with lower power consumption and faster data transfer rates. They are supplied in 96-ball and 78-ball FBGA packages.

Compared to DDR3 SDRAMs, the devices released today reduce operating voltages from 1.5 to +1.2V (±0.06V) to increase battery life in portable electronics such as notebook computers, smartphones, and tablets. For increased efficiency and performance in desktop computers and servers, the 256Mbit x 16-bit AS4C256M16D4 and 512M x 8-bit AS4C512M8D4 offer up to 16 memory banks and deliver faster clock speeds to 1333MHz for transfer rates of 2400Mbits per second per pin (1200MHz) and 2666Mbits per second per pin (1333MHz).

The AS4C256M16D4 and AS4C512M8D4 support sequential and interleave burst types with read or write burst lengths of BL8/BC4/BC4 or BC8 on-the-fly. An auto pre-charge function provides a self-timed row pre-charge initiated at the end of the burst sequence. Refresh functions include auto- or self-refresh.

The DDR4 SDRAMs are drop-in, pin-for-pin-compatible replacements to eliminate the need – and costs incurred with – redesigns and part requalification.

The DRAMs are JEDEC- and RoHS-compliant, lead (Pb)- and halogen-free.

Samples of the 4Gbit DDR4 SDRAMs are available now. Production quantities will be available in November 2019.

The privately held company has headquarters in San Carlos, California, and regional offices in Europe, Asia, Canada, and South America.