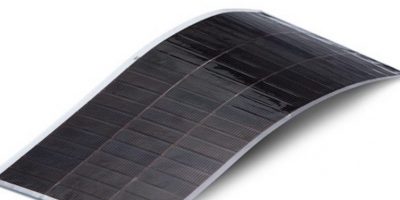 At Xponential in Chicago this week (30 April to 2 May), Alta Devices unveils its solar technology that will power stratospheric flight.

Until now, high altitude, long endurance (HALE) unmanned aerial vehicles (UAVs) and high altitude pseudo-satellites (HAPS) were unable to fly in the stratosphere (i.e. an altitude of 20km or 60,000 feet).

HALE UAVs and HAPS can include airplanes, airships, and/or balloons. In addition to being used for a variety of communications (such as cell phone connectivity and others), these aircraft can be used for intelligence, surveillance, and reconnaissance (ISR), search and rescue, border patrol and mapping.

These types of aircraft, often with wingspans as large as a Boeing 747, rely on solar power to remain aloft for weeks, even months, at a time but have not been able to fly successfully in the stratosphere. Now, Alta Devices’ Anylight Solar technology for HALE UAVs is high efficiency, lightweight, and flexible and able to extend endurance and range by providing more power to batteries. It can also power additional payload.

This solar technology can be simply applied to aircraft surfaces.

Flight at this altitude demands solar technology that is different from the type used in terrestrial installations or space.  For example, at 60,000 feet, ultraviolet radiation from the sun is more intense than on the earth’s surface. Unlike in space with zero gravity, the generation of lift is important for stratospheric vehicles.

To allow the aircraft to carry a useful payload and enough batteries for night flight, the solar technology used must be extremely lightweight. A further consideration is that, unlike both terrestrial and space applications, at 60,000 feet, mechanical stresses during flight can be very tough on the aircraft surface and solar panels, so the solar material must be flexible and durable.

Alta Devices delivers efficient, thin and flexible mobile power technology. By converting light of any kind into electricity, Alta Devices AnyLight power technology extends the energy source of a system, and in many cases, completely cuts the traditional power cord. The technology can be integrated into the final system, and is suitable for use in automotive, unmanned systems, satellites, consumer electronics, sensors or anywhere size, weight, and mobility matter. Alta Devices holds world records for energy conversion efficiency and is headquartered in Sunnyvale, California, USA.