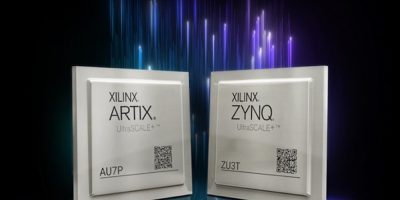 Building on the Zynq UltraScale+ MPSoCs and Artix UltraScale+ FPGAs, AMD has introduced the AU7P FPGA and ZU3T MPSoC. Both are based on the 16nm FinFET process for low power, high performance per Watt and small form factor applications. The SoCs are small, low cost, and low power entry points to the programmable logic transceiver-based UltraScale+ family, said AMD, with improved features such as high IO-to-logic density, UltraRAM and DSP.

They provide up to 50 per cent lower static power, 20 per cent more I/O-to-logic ratio and twice as many 3.3V HDIO compared to the AU10P device, confirmed AMD.

The ZU3T MPSoC device is the smallest device added to the Zynq UltraScale+ family with 12.5Gbits per second GTH transceivers for cost-optimised applications. The GTH transceivers are highly configurable and tightly integrated with programmable logic resources of the UltraScale+ architecture. It also has five times the transceiver bandwidth compared to the ZU3 device for critical networking applications, vision and video processing, and secured connectivity.

It also has a higher DSP slice count compared to the ZU3 for better signal processing compute, said AMD. The additional UltraRAM adds 2.5 times the embedded memory for embedded and video processing applications.

The ZU3T contains a 64-bit processor combining real-time control with soft and hard engines for graphics processing. An Arm-based CPU sub-system is integrated for advanced analytics and there is on-chip programmable logic for task acceleration, making the MPSoC suitable for camera monitors, medical imaging and automotive infotainment systems.

Both will be available in automotive (XA) grade, qualified according to AEC-Q100 test specifications with full ISO26262 ASIL-C level certification.