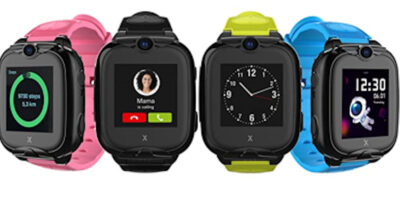 A smartwatch based on the Xplora Goplay platform motivates young children to be active while granting parental control of phone numbers to eliminate unsolicited calls.

The XGO2 smartwatch by Norwegian smartwatch company, Xplora, is an affordable, feature rich smartwatch with mobile phone and GPS tracking capabilities, says the company. It is GDPR-compliant and is intended as a first phone for children aged five to 12 years old.

The XGO2 runs on Android 4.4 and has a 1.4-inch capacitive touch, colour LCD screen and a resolution of 240 x 240. It has a 1.2GHz quad core Arm Cortex-A7 frequency, 512Mbyte RAM and Spreadtrum SC9820E chipset. Wearers can make and receive voice calls from pre-saved numbers only, to communicate with friends or family without the risk of receiving any unsolicited calls. Contacts can be managed on the parent’s app which is free to download.

There is an emergency SOS button, which notifies emergency contacts of the wearer’s location. The XGO2 also uses multiple services to show the devices location (GPS + Wi-Fi + LBS) to ensure it is accurate. There is an option to set up safety zones around key locations such as home and school, so alerts can be sent if children exit these areas.

The watch does not feature social media. It can be used to receive and reply to text messages including text, emojis, images and voice messages. There is also a 0.3Mpixel camera and 4Gbyte storage for photos.

School mode be activated so that there are no distractions in class, with all calls and messages disabled. In school mode parents are able to track the watch location and the SOS function is still active.

The watch has a 700mAh battery providing 72 hours of standby battery and working with Wi-Fi as well as 4G, 3G and 2G for reliable connectivity. It is also sealed to IP67 for water resistance.

A step counter encourages children to stay active. The XGO2 has built-in G Sensors to track steps to earn Xplora Coins which can be redeemed online via the Xplora Goplay gaming platform.

Children earn one coin for every 1000 steps they make and these coins can then be used to claim products, merchandise from partnership shows (e.g Sony PlayStation, Peter Rabbit, Dr Who or Tom & Jerry). There is a leaderboard and if the wearer is placed in the top three, they can also receive prize bundles which could include Bluetooth speakers, Amazon Fire kids tablets, instant cameras and Ryze Tello drones.

Children who wear Xplora smartwatches and engage with the Goplay platform typically take up to 300 per cent more steps a day than regular users, reports the company.

Additional features  include a torch, schedules, alarm and stopwatch to keep young children organised and on time. The XGO2 charges with a Pogo Pin magnetic charger allowing for contactless magnetic charging and also fits a Nano SIM card.

The Xplora XGO2 is available in black, blue, green or pink.