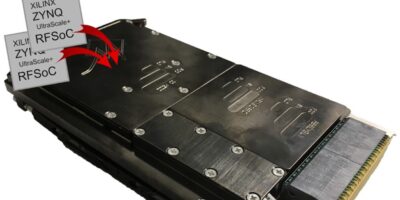 The FPGA board and systems supplier claims to have developed the first SOSA-aligned 100Gbit Ethernet RFSoC board that combines analogue and digital capability in a single 3U OpenVPX slot. These operations would require two or more boards, says Annapolis.

The Wildstar 3XR2 3U OpenVPX FPGA processor has a full-length coax-connected analogue interface mezzanine site which can be populated with a direct RF digitisation mezzanine, with simple analogue circuitry (for filtering, amplification, for example) or with a third party or customer-supplied analogue tuner to allow for digitisation of higher frequency signals

Annapolis has defined and standardised the interface between analogue and digital cards so that customers can deploy best-in-class RF and digitisation / processing capability in a single 3U VPX slot.

Combining filtering and tuning with digitising and processing delivers much lower SWaP-C (size weight and power and cost) than separate single function modules, says Annapolis, while maintaining the ability to upgrade either capability separately.

The company calls this a personalisation module because it allows for the customer to customise the module to focus on their particular frequency bands of interest.

The option for VITA 67 backplane RF connectivity is included.

Annapolis’ board support options include 40/100GbE IP and both VxWorks 7 and Linux support.