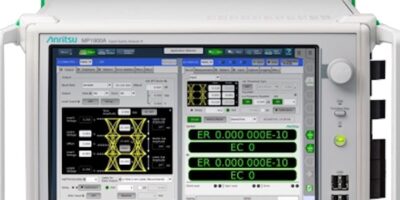 Functionality has been installed in Anritsu’s signal quality Analyzer-R MP1900A series which is claimed to lead the industry in evaluations for 400GbE and 800GbE transmission testing.

The forward error correction (FEC) symbol capture function and Bathtub test capability for the 116Gbits per second PAM4 Error Detector (ED) MU196040B are intended to support the spread of commercial, next-generation 5G mobile communications services which will enable faster sending and receiving of large video and data files. To support larger and faster transmissions, data centres are considering speed upgrades from the current 100GbE to 400 GbE and in future to 800 GbE/1.6TbE standards.

Pulse amplitude modulation (PAM4) is used in 400GbE but is easily affected by noise and transmission path losses. This makes it difficult to achieve the expected level of error-free transmissions and requiring use of FEC to correct generated errors and maintain transmission quality.

This requires quantitative measurement of jitter-related signal quality, such as jitter tolerance measurement for evaluating the performance of high-speed devices and transceivers for 400GbE.

To support this 400G network evolution, Anritsu has added the FEC symbol capture function to evaluate FEC-based network elements, and the PAM4 Bathtub test capability to its MP1900A.

Low-probability errors in data traffic are corrected using FEC. The new MP1900A error detection function determines if the errors can be corrected by FEC and starts capturing data streams only when the burst errors exceed the FEC uncorrectable threshold. From the captured data, a user can discover what kind of data steam caused the uncorrectable burst errors.

Anritsu has added the PAM4 Bathtub test capability has been introduced to evaluate and quantify the jitter phase margin. The impact of jitter can be severe as the data stream baud rate increases to achieve the higher capacity.

The modular MP1900A runs embedded Windows 10 and can easily be expanded, says Anritsu. As well as supporting 400GbE and 800GbE PAM4, it also has a bit error rate tester (BERT) for various high speed interfaces, including PCI Express Gen5 and USB4, using modules and application software.

In addition to increasing the accuracy of BER measurements, the MP1900 is claimed to help shorten development times for high-speed devices and transceivers.