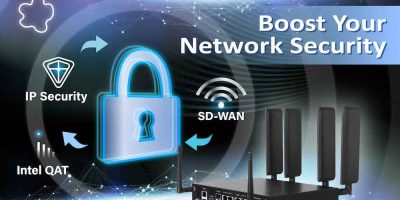 The ANS-8A64 server series is based on an Intel Atom C3000 processor, which qualifies it for network acceleration system for software defined wide area network (SD-WAN) users, said Portwell.

SD-WAN is used to connect a wide range of corporate networks, data centres, internet applications and cloud services, which aims to help reduce a WAN’s operating cost and improve connection flexibility, explained Portwell. More and more applications will depend on the cloud to process data, which also brings the escalating demands for network security as this data on the cloud may contain personal ID, credit card numbers and other private information.

IPSec protocol works in the third layer of the OSI (open systems interconnection) model and supports two modes, host-to-host mode and tunnel mode, either of which can be used to build a virtual private network (VPN) to increase the security of network transmission.

During field tests of the data plane development kit (DPDK) and Intel QAT, the ANS-8A64 was used as IPSec gateways and the encryption and decryption performance was repeatedly tested.

Portwell reported that the hardware acceleration engine, Intel QAT offers a “significant system optimisation and effectively betters the overall performance in both one-way and two-way testing”.