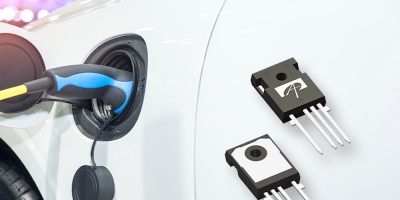 The 650V AOM015V65X2 and AOM060V65X2 aSiC MOSFETs are designed for switching solutions in industrial applications such as solar inverters, motor drives, industrial power supplies and new energy storage systems. The 750V AOM015V75X2Q and AOM060V75X2Q AEC-Q101 qualified SiC MOSFET line is targeted for the high-reliability needs in electric vehicle (EV) systems such as the on-board charger and the main traction inverter.

The AOM015V75X2Q 750V aSiC MOSFET expands on the company’s second generation 1200V aSiC MOSFET and diode products and is claimed to have an industry-leading low RDS(ON) down to 15mW in a standard TO-247-4L package while maintaining a recommended +15V gate drive voltage for broad compatibility with existing gate drivers, said AOS.

The minimised internal gate resistance and optimised cell design is claimed to result in fast switching speeds that are controllable with an external gate resistor.  This benefit is also noticeable in standard switching figures-of-merit (FoM) such as RON x QGD and RON x QRR that are superior compared to existing 750V SiC MOSFETs, claimed the company.

The aSiC MOSFETs features short circuit withstand time (SCWT) for planar SiC MOSFETs.  For many applications, and especially in EV inverters, a longer SCWT can improve the system’s ruggedness and give developers more flexibility in design. In order to achieve an increase in SCWT, it is typically necessary to also significantly increase the die size of the product, which can impact overall system costs, explained AOS.  In in-house tests, these new 750V MOSFETs have maintained a similar or lower RON x A while demonstrating a greater than 40 per cent increase in SCWT when compared to similarly-sized competitive products, reported AOS.