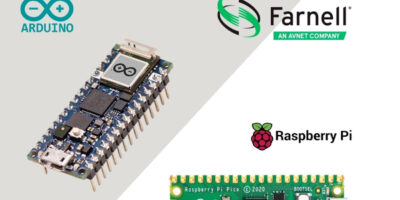 Engineers familiar with Raspberry Pi and Arduino can use the development boards to design and deploy new systems quickly and easily to accelerate time to market, says Farnell.

Raspberry Pi Pico was the first development board built on the RP2040 microcontroller, designed in house at Raspberry Pi and the Arduino Nano RP2040 Connect is the first connected RP2040 board that enables designers to benefit from the Nano form factor.

The Arduino Nano RP2040 Connect is suitable for edge computing, wearable devices, VR controllers, and can function as a voice assistant using the included omni-directional microphone.

The Arduino Nano RP2040 Connect and Raspberry Pi Pico are in stock and available for fast delivery from Farnell (EMEA), element 14 in APAC and Newark in North America.