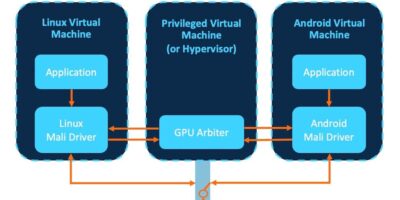 Virtualisation support capabilities in the DDK allow graphics processing unit (GPU) resources to be shared between multiple, graphically-rich applications running separate virtual machines. For security, the DDK has been designed so that one virtual machine cannot access another virtual machine’s information.

The Mali DDK virtualisation is designed to be completely invisible to applications as well, so developers will not need to modify their applications to support this. It all happens inside the driver and in system software.

Virtualisation enables in-vehicle graphics on cockpit domain controllers. A domain controller allows multiple electronic control units (ECUs) to be consolidated into a single ECU, often with a single SoC. Previously a single ECU may perform one function, such as a digital instrument cluster showing driver speed and warning lights, explains Arm. Using the Mali DDK, a cockpit domain controller is able to perform multiple functions by flexibly allocating resources to multiple workloads from a single SoC. For example, a single SoC, using the Mali DDK, can allocate compute resources to the instrument cluster, in-vehicle infotainment (IVI) and navigation system rather than requiring one SoC or ECU per application.

The Mali DDK supports Linux and Android, and the virtualisation features can be used across multiple operating systems and hypervisors to implement, for example, fast touch-screen response-times in virtualised systems.

Arm says that support for Mali GPUs and Mali DDK in automotive applications will be tailored to the market needs to ensure the software maintenance for the lifespan of the vehicle.

Arm claims that its ecosystem has become the world’s leading compute ecosystem by enabling the demanding expectations consumers have of applications, including immersive in-car experiences.

Arm technology is at the heart of a computing and data revolution, says the company. Its energy-efficient processor designs have enabled intelligent computing in more than 160 billion chips and its technologies now securely power products from the sensor to the smartphone and the supercomputer.