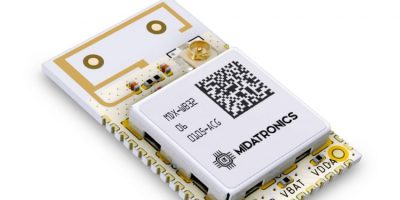 Distributor, Arrow Electronics has introduced a family of radio modules to jump-start IoT-device design, leveraging the power-efficient dual-core performance of STMicroelectronics’ STM32WB55 wireless microcontroller. The Sharky modules were co-developed with Italian designer Midatronics and are described as secure, energy-efficient, and real-time application-ready modules.

The modules come with the required RF (32MHz) and 32.7kHz crystals and are ready to start work.

For development support, there is the ST STM32Cube development ecosystem, which provides microcontroller-configuration tools, middleware, and new extensions for the STM32WB55, including peripheral drivers, connectivity libraries, and a monitoring tool for RF testing.