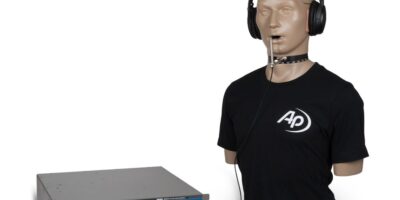 Set-up time for audio production testing can be reduced, using the APx517B acoustic analyser, says Audio Precision. Manufacturers of speakers, microphones, headphones, headsets and any consumer products with integrated speakers and microphones can calibrate at test system for a new shift, or configure a system for a change in the device under test (DUT) quickly using the analyser which combines an audio analyser (signal generation and acquisition), power amplifier, headphone amplifier and microphone power supply. It also includes any digital interface that may be required, such as Bluetooth.

The APx517B acoustic analyser can be used by manufacturers as an integrated acoustic test system. By eliminating the multiple, individual components required for testing, including the cabling, the set-up time is reduced. In addition, not having to use a variety of components, from different vendors, improves reliability and quality, points out the company. Time is also saved, because each configuration of a connection point, takes time to complete. Instead of individual components, the acoustic analyser is delivered with an accredited ISO/IEC 17025 calibration. It is also covered by a three-year warranty and accredited calibration.

It is also, says the company, available at the price of a production test.  The base model costs $6,000 and can perform the functional test of headphones, speakers, drivers and microphones.

Configuring the system for specific DUT, interface or measurement requirements is equally affordable, says the company. Advanced configurations are priced to compete with systems that are assembled from separate software, soundcard, amplifiers, mic power supplies and digital interface devices, while also eliminating the extra time needed to assemble the individual components into systems.

For digital devices there is a module slot for a single APx digital interface module, such as Bluetooth, PDM or HDMI. The standard system also provides a core set of measurements and functionality for fundamental testing of acoustic devices, namely,  file analysis, sequence mode, input signal monitors (including FFT monitor), level and gain, THD+N, loudspeaker product test (including rub and buzz), stepped frequency sweep, pass/fail, and signal acquisition measurement. A trio of Flex Packs is available, for perceptual audio measurements—including ABC-MRT and POLQA, for example. Other options for users who need the base configuration and just one or two more measurements are also available.

The APx517B ships with APx500 software release 6.0.1 software and one year of software maintenance, effectively licensing that instrument for APx version 7.0 when it is released, as well as any minor releases that occur between versions 6.0 and 7.0. is also available for download.