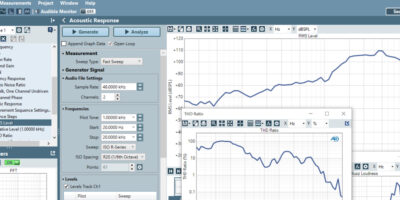 The latest software version has been introduced by Audio Precision, part of Axiometrix Solutions. At the same time, the company has introduced APx500 software subscriptions, offering users an alternative way to license APx software, and access nearly any software version and option.

In the first collaborative effort by the GRAS and Audio Precision engineering teams, APx500 release version 7.0 enables an APx user, in conjunction with an APx517B, APx1701, or Gras 12Bx power module, to run SysCheck2 and receive a pass/fail indication for each connected SysCheck2-capable microphone, without the need of a calibrator or physical access to the microphone. SysCheck2 was developed by Gras Sound & Vibration, also part of Axiometrix Solutions. The SysCheck2 system is designed to actively verify whether the sensitivity of a microphone has drifted since its last calibration. This capability is being introduced with two new 0.5-inch microphone sets, the 246AE pre-polarised free field microphone, and the 246AO pre-polarised pressure field microphone. From a microphone in a production test fixture to an array of microphones in an anechoic chamber, the combination of SysCheck2 and APx allows the user to verify the accuracy of the entire signal chain without physical access or potential disruption of the test set up.

Earlier this year, Audio Precision introduced the fast sweep signal, which provides the ability to sweep from low-to-high or high-to-low frequencies, and in comparison to a logarithmically-swept sine (or chirp) signal. Release 7.0 now enables the use of fast sweep in open loop testing scenarios, such as the testing of smart speakers. Fast sweep is the primary stimulus signal used for high order harmonic distortion (HOHD) or rub and buzz loudness measurements.

Power users who prefer bench mode, and those performing real-time adjustments on the devices under test (DUTs), will benefit from the enabling of transfer function in bench mode. V7.0 now provides access to transfer function measurement in bench mode as well as to the complex frequency response function for a device, including the magnitude and phase (or real and imaginary components), using any broadband signal (e.g., speech, music, or noise).

New APx audio analysers will begin shipping with v7.0 software in December. Each new analyser includes one year of software maintenance, effectively licensing that instrument for APx version 8.0 when it is released (as well as any minor 7.x releases that occur prior to v8.0). Release v7.0 is available now for download from the company’s website.

Release 7.0 is compatible with all analysers in the APx500 Series. An APx KeyBox is required to run v7.0 on legacy APx analysers. APx KeyBoxes already installed on legacy analysers are compatible with v7.0 and only require an updated license file once an upgrade is purchased (unless they are pre-licensed for v7.0 via an existing software maintenance contract, for example SW-MAINT-3).

The software subscriptions have been introduced as an alternative to perpetual software licenses. A perpetual software license grants a permanent, non-exclusive and non-expiring right to use the software. The license will still ship with each new analyser, but software subscriptions provide another path for existing users to access the latest software release and associated enhancements. The subscriptions grant a time-limited license – for periods of one, three or five years – and provide access to all versions and all options (excluding PESQ and POLQA). When the subscription expires, the analyser reverts to the software version and options for which it was previously licensed.

For users and organizations that prefer to retain perpetual licenses, software upgrades (SW-UPG), software maintenance (SW-MAINT), and extensions (SW-EXT, sold with new analysers only) remain available, but only include software options purchased for a given analyser.