Automotive MOSFETs are in SOP Advance package for 48V systems 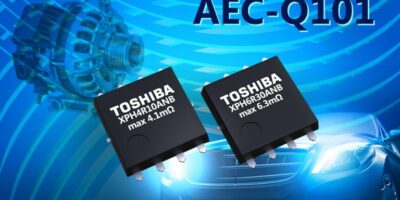 The XPH4R10ANB and XPH6R30ANB are designed specifically for modern 48V system applications, where they are used to boost converters for integrated starter generators (ISG) and LED headlights, motor drives, switching regulators and load switches.

The XPH4R10ANB and XPH6R30ANB MOSFETs improve the efficiency of automotive systems due to their low on-resistance or RDS(on), says Toshiba. The XPH4R10ANB is claimed to offer an industry-leading on-resistance of just 4.1 mOhm, which significantly reduces system losses, says the company.

Both MOSFETs are housed in the SOP Advance (WF) package which has wettable flanks. This small package was proven in 48V automotive applications and allows the use of automated optical inspection (AOI) to ensure the quality of solder joints, Toshiba adds.

Both devices are part of Toshiba’s U-MOSVIII-H series and offer a drain-source voltage (VDSS) of 100V and maximum operating temperature of 175 degrees C. The XPH4R10ANB supports a maximum continuous drain current of 70 and 210A when pulsed. The XPH6R30ANB supports 45 and 135A respectively.

Both devices are now in mass production and are shipping in production quantities.