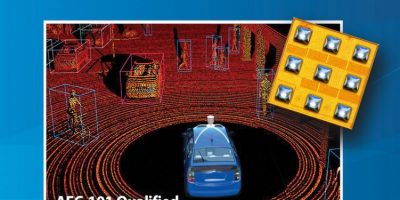 Optimised for high resolution light detection and ranging (lidar) systems, the EPC2214 is an 80V GaN transistor that Efficient Power Conversion (EPC) has added to its AEC Q101 family.

It is designed for lidar systems in the automotive industry and other harsh environments.  The company’s eGaN technology has been used in automotive applications, such as lidar and radar for autonomous vehicles as well as 48 to 12V DC/DC converters in data centre computers, high-fidelity infotainment systems and high-intensity headlamps for lorries.

The EPC2214 has completed rigorous automotive AEC Q101 qualification testing; the company has already announced that it will be followed by other discrete transistors and ICs designed for the harsh automotive environment.

The 80V, 20mOhm, eGaN FET has a 47 A pulsed current rating and is packaged in a very small 1.8mm2 footprint. These characteristics make it suitable for firing the lasers in lidar systems because the FET can be triggered to create high-current with extremely short pulse widths.  The short pulse width leads to higher resolution, and the higher pulse current allows the lidar system to discern objects at greater distances. It is also low in cost, making the EPC2214 eGaN FET suitable for radar and ultrasonic sensors as well as for lidar in demanding automotive applications.

The eGaN devices are produced in facilities certified to the Automotive Quality Management System Standard IATF 16949.

The EPC2214 eGaN FET is available for immediate delivery from Digi-Key.