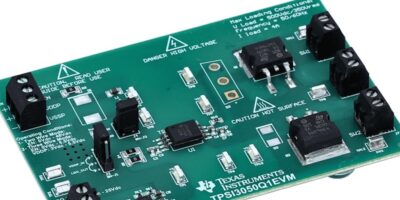 The new relays include the TPSI3050-Q1 isolated switch driver with an integrated 10V gate supply and the TPSI2140-Q1 1,400V, 50mA isolated switch. Both integrate power and signal isolation across a single barrier. The devices are the first in a solid state relays portfolio that will also include ICs designed for high voltage industrial applications, revealed TI.

“High-voltage systems are becoming more prevalent, especially with the increased adoption of EVs. At TI, we are strongly focused on finding new ways for system designers to solve complex isolation challenges, such as ensuring reliable and safe vehicle operation as the industry transitions to 800V batteries, while also reducing solution size and cost,” said Troy Coleman, vice president and general manager of Power Switches, Interface and Lighting at Texas Instruments.

Integrating more functionality within its isolation technology allows engineers to reduce the size, cost and complexity of high voltage power supplies while maintaining the safety of automotive and industrial systems, he added.

The solid state relays enable safer operation of high voltage automotive systems, said TI, by being able to disconnect and connect loads through a single isolation barrier in microseconds, rather than the milliseconds performance of electromechanical relays.

The TPSI3050-Q1 offers reinforced isolation up to 5kV RMS and also provides an operating lifetime that is 10 times higher than electromechanical relays, claimed TI.

The ability to integrate power and signal transfer in a single chip and eliminate at least three components, reduces both solution size and BoM costs – TI estimates this reduction could be as much as 50 per cent.

For example, TI said the TPSI3050-Q1 reduces solution size up to 90 per cent compared to mechanical relay solutions by integrating the functions of an isolated power supply, digital isolator and gate driver.

The TPSI2140-Q1 integrates a signal field-effect transistor and resistors and eliminating the need for a reed relay.

Designed for high voltage measurements and insulation monitoring, the TPSI2140-Q1 works with a battery-pack monitor (such as the BQ79631-Q1) to detect insulation faults in 800V battery-management systems faster and with higher accuracy than solid-state photo relays, added TI. The TPSI2140-Q1 enables the use of below 1.0 MOhm resistors and withstands over 300 per cent more avalanche current than traditional photo relays for safer human-system interaction.

The TPSI3050-Q1 and TPSI2140-Q1 are available in pre-production, 1,000 unit quantities. Engineers can evaluate either relay using the TPSI3050Q1EVM and TPSI2140Q1EVM evaluation modules.