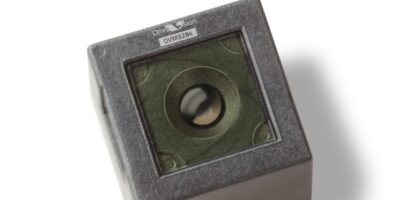 Believed to be the industry’s first automotive-grade, wafer-level camera, the OVM9284 CameraCubeChip module is an automotive-grade, wafer-level camera, developed by OmniVision Technologies. The one Mpixel module is compact, measuring 6.5 x 6.5mm, enabling it to be placed in more places with the cabin as part of the vehicle’s driver monitoring system (DMS), while being hidden from view. It is also claimed to be the lowest power consumption among automotive camera modules—over 50 per cent lower than the nearest competitor. This enables it to run continuously in the tightest of spaces and at the lowest possible temperatures for maximum image quality.

The OVM9284 is built on OmniVision’s OmniPixel 3-GS global-shutter pixel architecture, which is claimed to provide quantum efficiency at the 940nm wavelength for the highest quality driver images in near or total darkness. The integrated OmniVision image sensor has a three micron pixel and a 0.25 inch optical format, along with 1280 x 800 resolution.

“The accelerated market drive for DMS is expected to generate a 43 per cent CAGR between 2019 and 2025, said Pierre Cambou, principal analyst, imaging at Yole Développement. “DMS is probably the next growth story for ADAS cameras as driver distraction is becoming a major issue and has brought regulator attention,” he added.

“Most existing DMS cameras use glass lenses, which are large and difficult to hide from drivers to avoid distraction, and are too expensive for most car models,” said Aaron Chiang, marketing director at OmniVision. The OVM9284 CameraCubeChip module is designed to provide wafer level optics in a small, low power consumption and reflowable form factor.

The OVM9284’s integration of OmniVision’s image sensor, signal processor and wafer-level optics in a single compact package eliminates the complexity of multiple vendors and increases supply reliability while speeding development time, says the company. The CameraCubeChip modules, unlike traditional cameras, are reflowable. This means they can be mounted to a PCB simultaneously with other components using automated surface-mount assembly equipment to reduce assembly costs.

OVM9284 module samples are available now, and mass production is expected in Q4 of 2020.