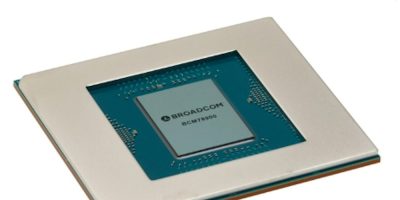 The BCM78900 also delivers high bandwidth, glueless network connectivity of up to 51.2Tbits per second on a single chip.

Its architecture delivers L2 and L3 switching, routing, and tunnelling capabilities at line rate and maximum port density, with low power and latency. Software compatibility is maintained across the StrataXGS portfolio to simplify customer designs and reduce customer time to market, said Broadcom.

As server interfaces transition to higher Ethernet speeds and virtualisation continues to increase link utilisation, data centre networks demand switches with dense 50GbE to 800GbE connectivity at the edge and aggregation layers. According to Broadcom, being equipped with up to 64 x [PM8x100] SerDes and the ability to configure 50GbE, 100GbE, 200GbE, 400GbE, and 800GbE ports, allows a single switching chip to build scalable, cost-effective leaf, spine, blade, and aggregation switches across the entire data centre.

The 51.2Tbit per second shared buffer architecture is claimed to provide lowest tail latency for RoCEv2 and other new RDMA protocols. Other capabilities are advanced adaptive routing, dynamic load balancing, and support for end-to-end congestion control capabilities which have been specifically designed to handle the large, low entropy flows typical of AI/ML workloads.

There is also support for Clos and non-Clos topologies such as torus, Dragonfly, Dragonfly+, and Megafly. Another feature is hardware-based link failover for improved network resiliency and reduced JCT.