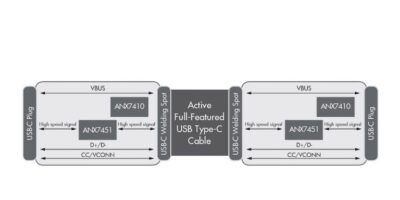 Signal conditioning technology from Analogix Semiconductor has been expanded with the addition of the Time Square RD1011 reference design for USB-C to USB-C active cable with true bi-directional support.

It has an integrated retime and a cable architecture with separate reference clock independent SSC (SRIS) and link training-tunable PHY repeater (LTTPR) support.  According to Analogix, it is capable of connecting a USB-C source to a USB-C device across multi-meter distances.

The RD1011 is claimed to have the highest interoperability, lowest power consumption at under 1.5W and lowest bill of materials (BoM) cost available today.

It has a dual retimer architecture with connection via a four meter twisted-pair cable and one paddle card at each end of the cable. This maximises length without sacrificing performance.

RD1011 is sampling now and product demonstrations are taking place during CES 2020 at Analogix Exhibitor Suite 30-136 in The Venetian, Las Vegas.

Analogix Semiconductor designs and manufactures semiconductors for the digital multimedia market, from portable devices such as smartphones, notebooks, and AR/VR head mounted displays, to large, high-definition TVs and high-end graphics cards. Analogix says it is the market leader in providing end-to-end interface connectivity semiconductor solutions for DisplayPort (its SlimPort brand), including high-speed signal conditioners and an industry leader in display panel controllers, such as low-power, high-speed timing controller solutions. The DisplayPort standard is an innovative, packetised digital interface for high-resolution video and audio that was developed by the Video Electronics Standards Association (VESA). SlimPort branded products are compliant with DisplayPort, Mobility DisplayPort (MyDP), and DisplayPort Alternate Mode over the USB Type-C connector.