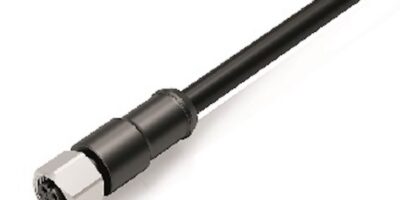 Industrial circular connector manufacturer, Binder, has announced the first models in a range of M12A coded, moulded connectors that incorporate both power and signal/data contacts.

The versatile “hybrid” M12 connectors can be used where power and signal are required in a limited space, for example, sensors, actuators, camera systems, motors and drives and controls systems.

The polyurethane (PUR) moulded cable connector features 0.75mm2 AWG 18 wires for power and 0.14mm2 AWG 26 for signal. It is supplied with two or five metre cable as standard. Alternative lengths are available from the company on request.

When mated, they provide protection to IP67 and an operating temperature range of -25 to +85 degrees C.

Binder has revealed that future models will include contacts with six contacts, two power contacts rated to 16A and four shielded signal contacts for Cat5e cable- based data applications.

Binder is a family-owned company employing 1,800 people worldwide. It supplies industrial circular connectors for a range of products suitable for all types of industrial applications.

Based in Neckarsulm, Germany, Binder has offices in Germany, Switzerland, France, the United Kingdom, Sweden, the Netherlands, China, Singapore and the USA.

The UK operation is based in Hemel Hempstead and was formed in 2009 to serve a growing UK market for the binder range of industrial circular connectors.