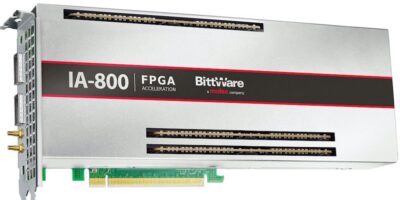 The IA-840F delivers up to 40 per cent higher performance or up to 40 per cent lower power, depending on application requirements, says BittWare. The company used the Agilex chip’s tiling architecture to maximise I/O features, with dual QSFP-DDs (4x 100G), PCIe Gen4 x16, and three MCIO expansion ports.

BittWare also announced support for Intel oneAPI, which enables an abstracted development flow. To streamline cross-architecture development, oneAPI includes a direct programming language, Data Parallel C++, and a set of libraries for API-based programming. Data Parallel C++ is based on C++ and incorporates SYCL from the Khronos Group. This simplifies code re-use across multiple architectures while facilitating custom tuning for accelerators, explains BittWare.

“Modern data centre workloads are incredibly diverse requiring customers to implement a mix of scalar, vector, matrix and spatial architectures,” said Craig Petrie, vice president of marketing for BittWare. “For those customers who prefer to develop FPGA applications at an abstracted level, we are including support for oneAPI. This new unified software programming environment allows customers to program the Agilex FPGA from a single code base with native high-level language performance across architectures,” he added.

The Intel Agilex FPGAs and cross platform tools, such as the oneAPI toolkit, provide easier access to the newest FPGAs which are capable of eASIC integration, HBM integration, BFLOAT16, optimised tensor compute blocks, Compute Express Link (CXL), and 112Gbits per second transceiver data rates for high speed 1Ghz compute and 400Gbits per second and above, connectivity, explained Patrick Dorsey, Intel’s vice president, Product, Programmable Solutions Group.  The customisable and heterogenous Agilex and oneAPI tools enable products like the new IA-840F accelerator card to drive innovation from the edge to the cloud, he added.

The first IA-840F card shipments are scheduled to begin Q2 2021. Customers can purchase the new card as a pre-integrated Dell or HPE server from the BittWare TeraBox range. They are covered by a three-year warranty. Each TeraBox server is delivered with pre-installed FPGA card, operating system, driver and tools.

BittWare is a Molex company. It designs and manufactures enterprise-class FPGA hardware. Its portfolio extends to developing FPGA accelerators and it claims to be the only FPGA vendor-agnostic supplier of critical mass able to address enterprise-class qualification and lifecycle requirements for customers deploying solutions in volume.