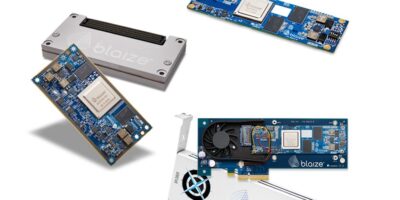 Efficient and cost-effective real-time AI computing is the promise of the Blaize Pathfinder and Xplorer platforms by Blaize. The embedded and accelerator platforms are built on the Blaize Graph Streaming Processor (GSP) architecture, designed for the demands of real-time AI edge computing.

The Pathfinder and Xplorer platforms coupled with the Blaize AI software suite are claimed to enable developers to introduced commercially viable edge AI products across a wide range of edge use cases and industries.

According to Dinakar Munagala, co-founder and CEO, Blaize, the AI edge computing products overcome “limitations of power, complexity and cost to unleash the adoption of AI at the edge, facilitating the migration of AI computing out of the data centre to the edge”.

The GSP provides 16 GSP cores and 16TOPS of AI inference performance within a tiny 7W power envelope and is claimed to deliver up to 60x better system level efficiency compared with GPU/CPUs for edge AI applications. It also enables 50x less memory bandwidth and 10x lower latency without compromising flexibility, says the company. The programmable processor’s capabilities include multi-threading and streaming.

The Pathfinder P1600 embedded system on module (SoM) brings the programmability and efficiency benefits of the GSP to embedded edge AI applications deployed at the sensor edge, or on the network edge. No host processor is needed for the P1600.

The Blaize Xplorer Accelerator platforms are built to accelerate AI applications at the edge of the enterprise, via plug-in, to the PCIe slot in a host server or appliance. The X1600E is a small form factor accelerator platform for small and power-constrained environments such as convenience stores or industrial sites. This accelerator form factor can accelerate AI apps in industrial PCs or as a rack of cards in a small 1U server.

The X1600P is a standard PCIe-based accelerator in a half-height, half-width form factor. It is designed to replace a power-hungry desktop GPU in edge servers and provide between 16 to 64TOPS of AI inference performance within a very low power envelope.

The Blaize AI software suite is built on open standards and comprises the Picasso software development kit (SDK) and AI Studio, a completely code-free visual interface. The software suite offers tools for both traditional developers and non-coder domain experts.Both tools sets use Blaize Netdeploy, which has edge-aware algorithms to get the best accuracy and performance for edge deployments.

Intended applications are in industrial settings, where five independent neural networks can run at 50 frames per second with less than 100ms aggregate latency monitoring human and robot pose detection and position, product ID and count, and product quality.

In the same smart city, high resolution FHD video and lidar/radar sensor fusion can run as a complete graph-native application on Blaize GSP. For example, sensor fusion of HD cameras can run at 30 frames per second combined with lidar/radar with less than 100ms latency and less than 15W power, can be used in last mile delivery.

Another application is in retail where four independent neural networks, also running at 50 frames per second can monitor human detection, position, mask and incidences of theft for store safety and security and product detection.

Customer samples of both Blaize Pathfinder and Xplorer are available now with full production expected starting in Q4 2020.