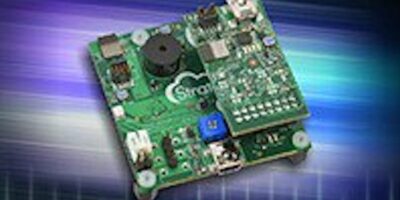 The platform consists of two RSL10 mesh nodes and a Strata Gateway for connectivity to the Strata Developer Studio.

Complementing the RSL10 SiP, an array of sensing and indicator devices has been incorporated into the node hardware, including an ambient light sensor (LV0104CS), temperature sensor (N34TS108), magnetic sensors, LED indicators and a triple-output NCP5623B LED driver (for colour mixing). There is also a built-in battery charger either li-ion or li-poly batteries.

The mesh nodes can be configured to take on different roles and functions. The Strata Gateway allows evaluation processes to be carried out using the intuitive Strata Developer Studio. The cloud-connected software enables provisioning of additional mesh and supports firmware-over-the-air (FOTA) updates.

Virtual workspaces for common mesh networking examples, including a smart office, can be used by developers to access sensor data and trigger settings. The energy- efficient RSL10 radio is supported by an Eclipse-based integrated development environment (IDE), a mobile application for provisioning, configuring and controlling a Bluetooth LE mesh network and a Mesh Networking software package which is compliant with the Bluetooth SIG.

“Operational constraints and ease of implementation still represent major challenges,” said Wiren Perera, head of IoT at ON Semiconductor. “Through this new platform we are helping to dramatically accelerate mesh networking development, so that nodes can be more rapidly deployed which push the performance envelope in terms of range, resiliency and power budget.”

The company has a network of manufacturing facilities, sales offices and design centres in key markets throughout North America, Europe and the Asia Pacific regions.