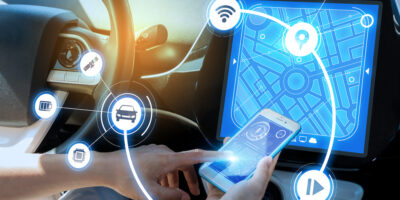 One is a matching circuit technology that covers a wide impedance range and enables the IC to match a variety of antenna and board impedances without an external impedance-matching circuit. The second is a signal correction technology for locally generated reference signals that uses a small circuit to self-correct inconsistencies in the circuit elements and variations in surrounding conditions without calibration.

Renesas has verified the effectiveness of these technologies on a Bluetooth LE RF transceiver circuit prototype built with a 22nm CMOS process. The company says that using these technologies it has reduced the circuit area, including the power supply to 0.84mm2. This is claimed to make it the world’s smallest device of this type. This was achieved by modifying the receiver architecture to reduce the number of inductors and making enhancements such as a low-current baseband amplifier with a small mounting area and a Class D amplifier. For power efficiency, consumption is 3.6mW and 4.1mW during reception and transmission respectively.

The second technology discussed is the reference signal self-correction circuit which eliminates the need for a calibration circuit, known as self-IQ-phase correction or SIQC.

A reference signal approximately the same frequency as that of the wireless radio signals received via the antenna is generated internally by the RF transceiver. The signal is used to convert GHz band wireless signals to low frequency baseband signals.

Accuracy of the reference signal can be degraded by inconsistencies in the circuit elements or variations in the temperature or supply voltage. Previously, the compensation technology for phase and amplitude deviations with a calibration circuit was used to accurately generate the reference signal. This led to problems, however, because integrating such a calibration circuit required a larger chip area, higher power consumption, and increased test cost.

In response, Renesas has developed the self-IQ-phase correction circuit technology that uses reference signals of four different phases to correct each other by allowing the phase differences to cancel each other out. This self-correction circuit is much smaller and can be implemented at approximately one-twelfth the size of a conventional calibration circuit. The image signal rejection ratio, crucial to reception performance, averages 39dB, which meets the Bluetooth standard with a comfortable margin to spare.

Both technologies are applicable to different types of RF transceivers in addition to Bluetooth LE, said Renesas.