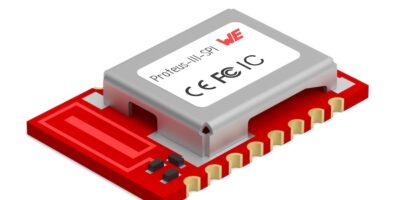 Using a serial peripheral interface (SPI) instead of a UART interface, the Proteus-III-SPI Bluetooth Low Energy 5.1 module is a variant of the established Proteus-III, released by Würth Elektronik.

It is based on the Nordic Semiconductor nRF52840 chipset, and has a payload of up to 964bytes, and offers four times the throughput of most Bluetooth low energy modules. The SPI allows a significantly higher data rate than the UART, explained Würth, with 1.5 times the end-to-end data throughput, allowing the SPI-enabled module to bypass potential bottlenecks on the application side.

The Proteus-III-SPI module is identical in terms of hardware to the UART version, making it suitable for applications in which no free UART interface is available, or if the data throughput of the UART interface is insufficient. It is also more power efficient than the UART version, said Würth and although the integration workload is slightly higher with SPI, Würth addresses this with the provision of a wireless connectivity software development kit (SDK).

The Bluetooth module measures 8.0 x 12 x 2.0mm, and has integrated antenna, encryption technology and six configurable I/O pins. It is therefore suitable for use for IoT and M2M applications in radio-based maintenance interfaces and sensor networks.

The Proteus-III-SPI is also an alternative to the SPP (Serial Port Profile) mode for serial data transmission, which is useful for industrial applications. A long range mode is included.

Proteus-III-SPI is available now, ex-stock without a minimum order quantity.

The Würth Elektronik eiSos Group manufactures electronic and electromechanical components. It is one of the largest European manufacturers of passive components and is active in 50 countries. Production sites in Europe, Asia and North America.

Würth Elektronik is part of the Würth Group, which specialises in assembly and fastening technology.