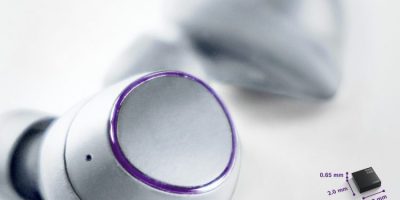 User interactions and accurate activity tracking are enabled by the BMA456 accelerometer variant with integrated hearable features. The sensor from Bosch Sensotec will be highlighted at the Sensors Expo and Conference later this month.

The BMA456 hearable accelerometer is claimed to be the industry’s only accelerometer with optimised hearable features integrated in one sensor. It complements the company’s BMA456 wearable sensor. Manufacturers can now design smaller and more accurate hearables with lower power consumption while increasing their performance, says Bosch, for hearable devices such as standard or sports earbuds, hearing aids or gaming headsets.

Hearables are a fast-growing market segment, and a major growth driver in the wearables space. Based on data from SAR Insight & Consulting, the market for true wireless earbuds (TWE) is expected to grow to almost 180 million units by 2023.

The BMA456 accelerometer integrates hearable-specific gestures for intuitive user interactions such as tap, double-tap and triple-tap. The user can, for example, control playback, manage the volume, or accept and decline calls, carried out within the BMA456, which conserves energy by eliminating the need to wake up an application processor. The BMA456 has a height of just 0.65mm, suitable for truly wireless stereo (TWS) headsets and mid-range hearables.

To further limit power consumption, the BMA456 accelerometer accurately distinguishes between motion and no-motion, switching itself and the device to a low-power mode. The sensor enables low-power in-ear and out-of-ear recognition that could, for example, instantly pause playback when the user removes the hearable from their ear, and also to set the entire system to the sleep mode.

The BMA456’s low-power step counter and step detector is optimised for hearables. The recognition feature detects walking, running and standing still for sports and activity-tracking hearables that operate with smartphones or standalone.

The sensor’s low noise of 120 microg√Hz, low offset of ±20mg and low TCO of 0.35mg/k contribute to the accuracy levels, and allow users to benefit from an intuitive user experience, accurate activity tracking and an extended battery life.